A Place to Call Home by Justin Martinez 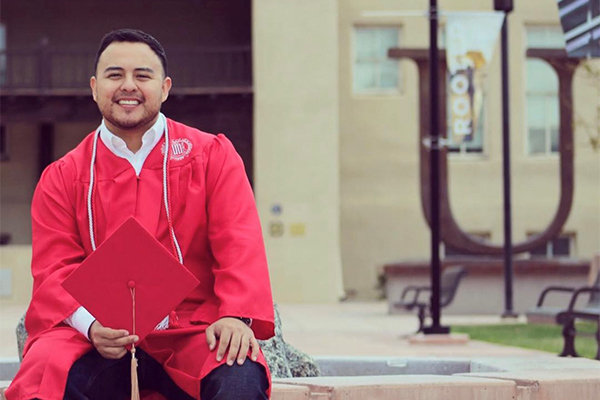 It was the Spring of 2017 - I was young and excited to take on any challenge that was thrown my way. Similar to many students here at UNM, I was born and raised right here in New Mexico and found comfort in attending a University that I was familiar with. To me, being a Lobo was never out of the question! My father attended UNM, both of my brothers attended UNM, and multiple family members have graduated from the school as well. Although I knew I wanted to continue in the family tradition of being a Lobo, I was left with the question many students face as they approach their second and third year of undergraduate studies - what do I want to do with my life? Luckily for me, I found a place to call home here at UNM – The Anderson School of Management.

My first introduction to the Anderson School came as I watched my brother graduate in the Spring of 2015 from Anderson. At the time I had no clue the impact that the school, and, moreover, the unique individuals at the school would have in my life. After transferring to the Anderson School of Management from the School of Engineering (Mathematics and I are not the best of friends), I immediately fell in love with the energy of the school! Coming to the school from elsewhere, it was refreshing to see the collaborative nature of the classroom experience here at Anderson. In addition, the diverse and energetic student population made the time fly by during my undergraduate career. I was fortunate enough to get involved in one of the many student organizations that Anderson has to offer (ALPFA of UNM) and the rest would be considered “history”. Through the content I was receiving in my Anderson courses as well as the extremely strong connections I had made within my student organization, I found myself accepting a year-round internship at Sandia National Laboratories where I worked in talent acquisition and recruiting, and later transitioned to Sandia’s University Partnerships team.

While at Sandia I was able to couple my schoolwork here at Anderson with my work at the labs to create an internship that was both meaningful and impactful! However, after just two years at the labs my young career was about to take a hard-right turn - I was considering leaving for an opportunity that I felt fit me like a glove, advising graduate students at the Anderson School of Management.

As aforementioned, the Anderson School has remained instrumental in both my personal and professional life for the past 4 years. I have graduated from our undergraduate program, I am currently in our MBA program, and I now have the unique opportunity to advise students within all of our graduate programs. This experience and in depth understanding of the school ultimately led me to make my decision to leave a tremendous opportunity at Sandia National Labs for, in my opinion, an even better opportunity here at Anderson!

Ultimately, I chose to be at Anderson because I am Anderson.

To me, Anderson is Home, and I hope to continue to provide students with the opportunities and resources to find out why I am so passionate about this school in the years to come!