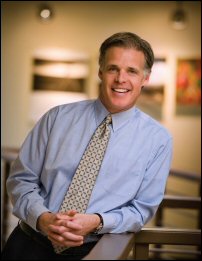 Albuquerque, N.M.--Steve McKee, president, McKee Wallwork Cleveland, will present "When Growth Stalls," a lively presentation based on his new book "When Growth Stalls: How It Happens, Why You're Stuck & What To Do About It," on April 20, 7:00 p.m. in the Paul R. Jackson Student Center (next to Parish Library) at the UNM Anderson School of Management. The event is free and open to the public.

McKee's presentation is compelling, dynamic, and truly timely. He shares vital insights into how companies lose their way, and exposes the destructive (and often hidden) internal dynamics that hinder successful turnarounds. The presentation will be followed by a reception and book signing. The UNM Bookstore will have copies of the book available for purchase on-site.

Steve has a unique understanding of what happens when growth stalls. Over the past six years, his firm has conducted significant research among some 700 corporations, many of which had at one time been among the United States' fastest-growing companies. In his presentation, McKee presents compelling knowledge about how and why companies lose their way, and offers practical advice about how they can rekindle growth.

McKee demonstrates how sluggish growth is generally produced not by mismanagement or strategic blundering, but by natural market forces and internal management dynamics that often go unrecognized. He presents seven characteristics that commonly correlate with stalled growth, beginning with external forces to which countless companies have been caught off guard: economic upheavals, changing industry dynamics, and increased competition. More surprising are four subtle and highly destructive internal factors McKee has identified that conspire to keep companies down: lack of consensus among the management team, loss of nerve, loss of focus, and marketing inconsistency. 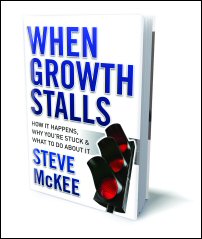 Steve McKee is the president and co-founder of McKee Wallwork Cleveland, a full service marketing communications firm that has twice been awarded the American Marketing Association's EFFIE Award, one of the industry's highest honors. He graduated from the UNM Anderson School of Management in 1985 with a degree in marketing.

Steve has been published or quoted in The New York Times, USA Today, Advertising Age, Adweek, Investor's Business Daily and The Los Angeles Times, as well as in dozens of regional and local newspapers and magazines throughout the U.S. He has appeared on CNBC, ESPN2, CNNfn, Bloomberg radio and network television affiliates in more than two dozen cities across America.

Paid parking is available at metered spaces on the main campus or at the Cornell Parking Garage located just across from the UNM Bookstore near the corner of Central Avenue and Stanford Drive.

The event is sponsored by the UNM Anderson School of Management and the UNM Chapter of the American Marketing Association.