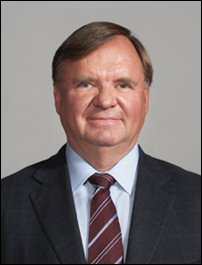 Mr. Thornburg discussed some of the unprecedented challenges facing the American economy and how some of the changes currently underway in Washington will forever change how the economy functions and operates in the future. His presentation also answered the following questions: What role will the government play in the mortgage market? Are Fannie Mae and Freddie Mac dead? What role will it play in regulating financial institutions? Will this include hedge funds and other non-regulated entities? Will the government increase its oversight of the rating agencies? Will the government use the SEC or some new regulator to have more control over accounting standards? How else will the government change the financial life of America?

Mr. Thornburg is Chairman of the three Thornburg companies, all of which he founded. Thornburg Investment Management was established in 1982; Thornburg Securities Corp. in 1984 and Thornburg Mortgage in 1993. Prior to moving to Santa Fe in 1982, Thornburg was employed at Bear, Stearns & Co., where he was a Limited Partner and founding member of its public finance department.

Prior to that, he was Chief Financial Officer of New York State’s Urban Development Corporation. Thornburg also served as a co-financial advisor to the State of New Mexico’s Board of Finance in its first bond refunding activity ever undertaken. He holds a BA from Williams College and an MBA from Harvard University.