The UNM teams competed against other student teams representing schools in the states of Colorado, New Mexico, Texas, as well as students from the country of Mexico.

The teams presented business plans based on innovative technologies to a group of judges consisting of successful business people, entrepreneurs, venture capitalists and other business experts. Both UNM teams advanced to present in the final round as two of the four finalist teams. 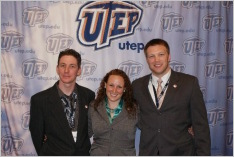 Photo: Mimic Tracking Systems – (from left to right, John Soladay, Whitney Sanzero, Adam Heying).
One of the UNM teams, Mimic Tracking Systems, consists of three MBA students in Management of Technology: Whitney Sanzero, Adam Heying, MBA candidate also in Finance, and John Soladay, Fall 2009 MBA graduate. Whitney Sanzero won the Best 60-Second Elevator Pitch Contest, making this the second year in a row that the award has gone to a UNM student, and Mimic placed 3rd overall in the competition for a total award of $1,250. The winning pitch was professionally filmed and edited and it can be viewed from the competition's website along with competition photographs at https://www.bnsl.org/CRVC2010.htm. 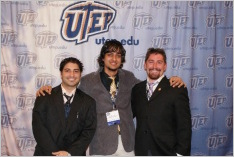 Both teams look forward to competing in the UNM Technology Business Plan Competition at the Anderson School of Management on April 16, 2010. The UNM competition is open to the public, and more information and a schedule of events can be found online at https://techbizplan.mgt.unm.edu/.

The Mimic Tracking Systems pitch was sponsored by RCIC and can be viewed on YouTube at: