(Albuquerque, NM) The Anderson School of Management is pleased to announce John "Jack" Rust will receive an Honorary Degree to the University of New Mexico at the UNM Spring Commencement on Saturday, May 14. 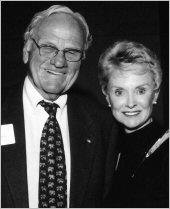 Although neither Jack nor his wife Donna attended UNM they have been loyal supporters of the school. The couple has made substantial gifts to UNM, including two professorships, the Jack and Donna Rust Endowed Professorships in Business Ethics at the Anderson School. They created the professorships in 2003 after the scandals at Enron, and WorldCom Inc. became known. He said he funded the endowment to steer business leaders away from unethical behavior. The Rusts' also established the Jack and Donna Rust Endowed Professorship in Biomedical Ethics at the UNM Health and Science Center Institute for Ethics. Mr. Rust is the founding chairman of both the UNM Foundation and the UNM President's Club. He is a long-time sponsor of the Presidential Scholarship Program and a member of the Popejoy Society.

Jack Rust graduated from Illinois Wesleyan College and the U.S. Military Academy at West Point, where he was an All-American lacrosse player. He served in the armored division in the Korean War and retired from the Army Reserves with the rank of colonel. In 1960, Jack Rust moved to Albuquerque where he founded the Rust Tractor Company, which was the exclusive dealer for Caterpillar heavy equipment and engines in New Mexico and West Texas. Under his leadership, Rust Tractor grew to a firm of more than 400 employees.

Letters supporting the nomination of Jack Rust for the honorary degree were numerous, and all emphasized his generosity to UNM, CNM, and the New Mexico Military Institute. He and his wife have also made significant philanthropic contributions to Presbyterian Hospital, United Way, Albuquerque Community Foundation, the Museum of New Mexico, Santa Fe Community College and the Santa Fe Opera to list just a few of the many professional and civic organizations they have supported over the years.

Jack Rust was named an Outstanding Leader in Philanthropy by the New Mexico Chapter of the Association of Fundraising Professionals in 2006, and in 2008 Samaritan Counseling Center named the for-profit business awards in honor of Jack and Donna Rust.

"We are honored to be able to associate our university with Jack Rust, a New Mexican distinguished in both business and philanthropic leadership."

Pueblo advocate and leader Herman Agoyo, and watershed technologist and policy analyst Ron Gardiner will also receive honorary degrees on Saturday. UNM Honorary degrees are awarded to persons who have contributed significantly to the cultural or scientific development of the Southwest, or to the spiritual or material welfare of its people.