(Albuquerque, NM) Students from the UNM Anderson School of Management had a strong showing at the third annual Daniels Fund Ethics Consortium Case Competition in Denver, CO. The UNM students are the only consortium team to finish in the top three over the past three years of the competition. 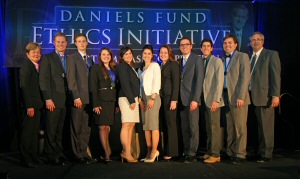 Student teams from eight regional universities were judged on how they would resolve an ethical dilemma that they could encounter in their professional careers. Teams were asked to hypothetically act as a consulting firm for a manger who overhears an employee telling a coworker that she is going to ignore her doctor's recommendation that she no longer do any heavy lifting, based on the results of a genetic test.

The UNM Anderson team of Sydney Sivils, Justin Fouts, Houston Hilbun, Mercedes Pratt, James Osterlund, Austin Tidwell, Sharif Amlani, Laura Gruet, and Mariah Rast came in second behind the University of Colorado-Colorado Springs for their case and presentation. The University of Utah was third. Teams were evaluated on principles established in the Ethics Initiative. The Initiative is modeled after the beliefs of late Colorado businessman Bill Daniels, many of which were developed during his time at the New Mexico Military Institute in Roswell, NM. They include integrity, trust, accountability, transparency, fairness, respect, rule of law, and viability.

"The team really understood the legal and ethical issues associated with this case," said Dr. Ferrell. "Their ability to ‘think on their feet' on the Part B (which they worked on in isolation) component of the competition defined their success. They shared the correct course of action in both parts of the competition."

Anderson Dean Doug Brown says preparation is the key to our students' success.

"I am so proud of the effort put forth by the Anderson team. Anderson's strong showing of finishing in the top three in all three years of the competition speaks to the quality of our students and the fine coaching by our professors."