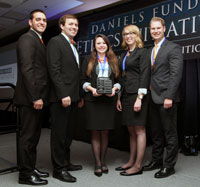 The UNM Anderson team of Justin Fouts, Mercedes Pratt, Austin Tidwell, Lauren Wade, and Phillip Doerges was dedicated and professional in their win over nine other consortium schools. The UNM team was mentored by Anderson Professors Harry Van Buren, Shawn Berman, O.C. Ferrell, and Linda Ferrell. Student teams from the University of Wyoming came in second and the University of Northern CO was awarded third place.

The UNM team was given a case in advance of the competition and presented their analysis the morning of April 24. They could use any and all guidance that was made available through UNM. Immediately after their presentation, the students were given Part B of the case and had 4 hours to respond to a crisis that developed related to the original case, this time with no outside guidance.

Teams were evaluated on principles established in the Ethics Initiative by late Colorado businessman Bill Daniels. They include integrity, trust, accountability, transparency, fairness, respect, rule of law, and viability.

"The members were polished, professional, innovative and creative and had a presence that 'raised the bar' for the case competition," said Dr. Ferrell. "The team told a story and abandoned traditional bullet-pointed Power Point slides to create a more memorable and impactful analysis."

Dr. Craig White, Interim Dean, was in Denver when the results were announced.

This is the fourth year of the Daniels Fund Consortium Case Competition and UNM Anderson is the only school to finish in the top three all four years. UNM earned second place honors last year and is the first school in the consortium to win outside of Colorado. Colorado State won the first 2 years and CU-Colorado Springs won last year.