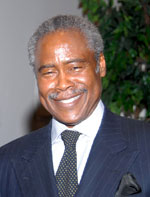 (Albuquerque, NM) The Anderson School of Management is proud to present prominent UNM alumnus Edward Lewis as the featured speaker of the McKinnon Distinguished CEO Lecture Series. Mr. Lewis is a co-founder of Essence Communications, one of the country’s largest African American multi-media organizations.

During his 35 years as chairman, CEO and publisher, Lewis nurtured Essence into a media powerhouse, addressing the needs of black women. He took this success and applied it to his next venture, Latina Magazine, which he also co-founded. Latina is the first lifestyle magazine that exclusively addressed the interests of U.S. Hispanic women. He has served as chairman since 2008. Lewis is also the author of the new book "The Man from Essence: Creating a Magazine for Black Women".

The McKinnon Distinguished CEO Lecture Series with Edward Lewis will take place on May 13 at the Crowne Plaza Hotel. The reception begins at 5:00 p.m. with the presentation at 6:00 p.m. It will be followed by a question and answer segment led by veteran journalist and interviewer Lorene Mills of the weekly PBS television show "Report from Santa Fe".

Edward Lewis earned his Bachelor and Master of Arts from UNM and was awarded an Honorary Doctorate. He is a recipient of the Henry Johnson Fisher Award, considered the "Oscar" in publishing, and received the Henry Luce Award from Time, Inc.

The public is invited to attend the lecture for free, however, seating is limited and reservations are required. RSVP online or contact Felicia Rodriquez at (505) 277-1504 or by email at feliciar@unm.edu.

The McKinnon Distinguished CEO Lecture Series was created in 2010 by Anderson alum Sonnet McKinnon and her husband D. Ian McKinnon as an expression of their commitment to UNM and the Anderson School. The endowed lecture series is held annually to provide a glimpse into the minds of successful entrepreneurs and business leaders.