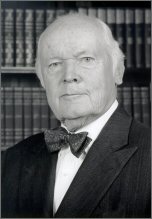 (Albuquerque, NM)  Robert O. Anderson was born in Chicago on April 13, 1917.  This month the namesake of the UNM Anderson School of Management would have celebrated his 100th birthday. To mark the occasion UNM Anderson School is inviting all faculty, staff, students, alums, and community members to attend a breakfast honoring Mr. Anderson.  The tribute will take place on Thursday, April 20, 2017 at 8:00 am in the Jackson Student Center.

Founded in 1947, The Anderson School was named for New Mexico oilman and longtime ARCO-Atlantic Richfield CEO Robert Orville Anderson in 1974. Robert was a petroleum executive, rancher and civic leader. He graduated from the University of Chicago in 1939 with a Bachelor of Arts degree before starting his lifelong journey in the oil industry.

Robert and his wife Barbara had seven children and were married for 68 years. He was 90 years old when he passed away at his Roswell home on December 2, 2007.

The celebration breakfast is open to everyone and hourly parking is available via credit/debit card at the structure located at Lomas and Yale, a short walk to the Jackson Student Center.

For more information contact Felicia Rodriquez at 505.277.1504 or via email feliciar@unm.edu.