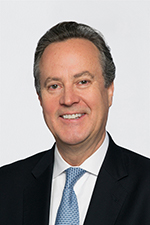 On Wednesday, April 3, Mr. Peterson will discuss “The State of the Global Economy, Risks to Growth and a Path to a Greater Good.” The event at Hotel Albuquerque begins with a reception at 5:00pm and the presentation at 6:00pm. There will be time following the talk for questions from the audience.

Mr. Peterson was born in Albuquerque and raised in Santa Fe before returning to Albuquerque to graduate from Del Norte High School. He earned his MBA from the Wharton School at the University of Pennsylvania and an undergraduate degree in mathematics and history from Claremont McKenna College.

Previously, Mr. Peterson was the Chief Operating Officer of Citibank, N.A., Citigroup’s principal banking entity that operates in more than 100 countries. He was with Citigroup for 26 years, during which time he led diversified businesses in investment and corporate banking, brokerage, asset management, private equity and retail banking. His prior roles include CEO of Citigroup Japan, Chief Auditor of Citigroup and Country Manager for Costa Rica and Uruguay.

Mr. Peterson is a Steward of the World Economic Forum’s (WEF) Shaping the Future of Long-Term Investing, Infrastructure and Development System and a member of WEF’s Financial Services Governors Community. He serves on the Advisory Boards of the Federal Deposit Insurance Corporation’s Systemic Resolution Advisory Committee, the US-China Business Council, the Partnership for New York City and the Kravis Leadership Institute, and the Boards of Trustees of Claremont McKenna College and the Paul Taylor Dance Company.

The public is invited to attend the reception and presentation at no cost, however, seating is limited and reservations are required. RSVP through the Anderson School website at https://www.mgt.unm.edu/events/ceo-lecture-series/ or by contacting Megan Borders at mborders@unm.edu.

The McKinnon Distinguished CEO Lecture Series was created in 2010 by Anderson alum Sonnet McKinnon and her husband D. Ian McKinnon as an expression of their commitment to UNM and the Anderson School.  The annual endowed lecture series provides a glimpse into the minds of successful entrepreneurs and business leaders. Sonnet and Ian McKinnon are also the lead donors of the new McKinnon Center for Management building that opened at the Anderson School in 2018.